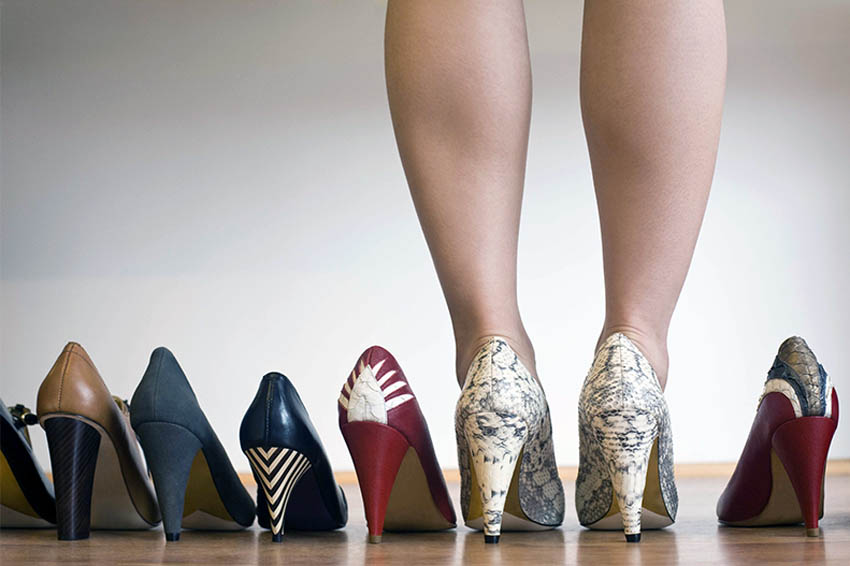 How to  choose the perfect best shoes for your feet tips for finding the right shoes
Do not take a false step  The bad choice of footwear can cause you annoying ailments. Prevention is better than cure!

I love the exaggerated and the eccentric, but you have to be comfortable. If not, it is silly. There is nothing charming about a woman who cannot walk with her shoes, ”said Manolo Blahnik in an interview.

But there is more. Throw the first stone who has not bought a pair of shoes simply because it was a ‘love at first sight’, or for its price, color or fashion, leaving aside other important aspects for the well-being of the feet.

Mortal sin! Yes, because it’s not just about putting on those stilettos, platforms, boots, sandals, sneakers or any type of footwear that is trending. Before you have to think about the health of the feet since a bad choice, over time, can end up taking your toll .

The poor choice of footwear causes chafing, blisters, corns, bunions or sores on the sole of the foot.
In fact, there’s nothing more pleasant than taking off those shoes that have tormented you during the day, right?

And your foot pain may pass after a couple of hours, but … be alert! According to specialists, the choice of inappropriate footwear can end up damaging your foot with scratches, blisters, calluses, bunions or deformations, such as claw fingers.

It can even cause serious injuries such as sprained ankle, falls in older people, and ailments in the joints or back.

It is no accident that in Spain the intervention of bunions is the most demanded surgery in podiatric consultations, and the fifth in Social Security, although more than 50% of these operations could be avoided with the use of good footwear

Along the same lines, the Spanish Association of Medicine and Foot Surgery ensures that 70% of the Spanish population suffers from a foot problem, and that many of them can be prevented. So let’s see what steps we should take to not have to regret later.

Four basic aspects to watch
Manel Pérez Quirós, a member of the CGCOP board, is clear about the priorities for choosing shoes: “we must always look for the adaptation of footwear to our foot and never the other way around”. “That means that if, for example, we have a very wide foot, we should look for a shoe of the right size,” says the expert.

In addition, to choose the most functional and comfortable shoe we must also take into account the material with which it is designed, emphasizes the podiatrist.

A synthetic footwear can cause macerations in the skin due to moisture, since these types of shoes do not perspire. It is desirable that the material is always breathable , and the most advisable are natural skins.

In addition, the type of sole must be monitored . The normal thing is that we are treading hard surfaces all day, and that means that the feet need a cushion , which we will achieve with a flexible sole.

“The muscles of the foot already act as a shock absorber, but that capacity ends up running out all day walking through these types of surfaces and we end up with foot pain,” says Manel Peréz, who is also president of the Official Colòlegi de Podòlegs de Catalunya .

Finally, the support of the heel part is also important. We will have to watch that we keep our foot in a homogeneous posture that does not allow us to twist to the side, since it can even cause an ankle sprain.

Do you wear the right size?
According to a study by the College of Podiatry in the United Kingdom, one third of men and almost half of women buy shoes without being exactly their size.

And it is that getting the right number is not always so easy .

Although each brand has its own shape, there is a simple formula to succeed with our size. From the General Council of Official Schools of Podiatrists of Spain recommend checking that at least there is a margin of one centimeter between what would be the toe of our fingers and the end of the shoe , always taking into account the distance from the longest toe , “Which is not always the fat man,” clarifies Dr. Pérez.

Another guideline that can serve as guidance when trying on shoes, adds the podiatrist, is that we should be able to place a finger without problems on the back of the shoe , in the heel area and the insert of the Achilles tendon. If so, there will be room for the shoe to expand comfortably when walking and support our weight on the foot.

Two more tips may be the most complicated to follow. If you can, you have to try both shoes as the feet change over time, and as we grow the differences are accentuated.

Also the ideal would be to try on the footwear at the end of the day to achieve the best fit. In addition, you should keep in mind whenever each foot is unique and the generic recommendations may not suit your needs. Therefore, if in doubt, the ideal will be to go to the podiatrist.

How often do you change your shoes?
The podiatrist Manel Pérez indicates that the ideal is to change shoes per season . “For example, if we are in summer or winter time we can alternate a couple of models,” adds the doctor, who emphasizes that if we spend a season with the same footwear we can get to ‘vitiate’ our way of walking , that is, to make you lose the compensation mechanism that makes a neutral shoe or that is not yet deformed (by our feet and our steps).

It will also be time to change your shoe when you see that it has excessive wear on the sole , especially in the heel. If it is deformed it means that we have destabilized it and can cause us small muscle injuries or make us walk incorrectly.

Heels: yes or no?

The CGCOP recalls that scientific studies show that when we are barefoot on the floor, 75% of the weight is supported by the heel and 25% by the forefoot.

As the heel height increases, the percentages vary, and the forefoot supports greater load. For example, with a 3-4 cm heel, the forefoot already supports both the heel (50% -50%) and one with 6-7 centimeters in height, the load is reversed (75% in the forefoot and 25 % in the heel).

The American Society of Foot and Ankle Orthopedics (AOFAS) lists five problems that can be caused by the continued use of heels : metatarsalgia and stress fractures, heel pain, deformations of the toenails, sprains or fractures, and bunions or hammer fingers.

However, for many women not falling asleep at the feet of those tempting heels seems mission impossible. And in those cases you can always pamper yourself, making them a punctual use .

Nothing to wear the heel daily, warns the podiatrist Manel Pérez. In addition, we must ensure that it has the necessary amplitude in the heel. “The recommended physiological measure would be between 2 ½ – 3 centimeters high,” adds the doctor.

In the same line, from the Spanish brand Merkal they advise that the heel be provided with a padded insole to the area where the fingers begin at least, so that it facilitates comfort and can compensate for the height. Nor should you forget the material of the shoe, which must be of quality and facilitate breathability and good temperature inside.

It is recommended to choose the right heel depending on the type of foot and the occasion. From Merkal they give some guidelines based on the experiences of their clients:

Stiletto : Height greater than 9 cm. His name is due to the fineness of his heel, which also stylizes. It becomes a basic in a shoemaker and is used on those occasions where we want to show glamor.

High heel : Above 7 cm. They stylize the figure, since visually our legs seem longer. They are ideal to wear long dresses and for occasions that deserve it. They are not recommended for long days of standing, because they tire a lot.

The specialists of the Spanish brand of footwear recommend, before releasing any heel, to previously use them at home and check their comfort and adaptation to the foot .

In the case of noticing a chafing we can moisturize the inside of the shoe with cream. We can also perform ankle and twin exercises to avoid injuries, experts explain.

A shoe for every need

A person walks about 150,000 miles in his life (more than 240,000 kilometers), according to the United Kingdom College of Podiatry. And although the health of the feet is the great forgotten, it is worth paying attention. And the first step to do this is to choose the right footwear, which varies according to the age and needs of each person. These are some aspects to consider:

It is important to monitor every two months that the footwear does not go small. Its ability to adapt to a shoe that goes small is very large, because its bone structure is not yet fully formed.

Then the entire musculoskeletal system has much more flexibility than that of an adult. The sole and footwear should be flexible so that they allow the foot to fully develop. Avoid putting a shoe with a rigid sole.

Senior citizens : When we have a foot deformed by the problem of age, osteoarthritis or bony prominences, we must look for shoes that really have materials that allow them to adapt to these irregularities, Pérez explains. Ideally, they should be flexible skin.

It is necessary to prevent the foot is compressed . Attention should also be paid to the method of restraint that you have, either with laces, elastic straps or buckles, so that this footwear is well attached to the foot and avoid the problem of falls.

The shoe of the work activity is the most important, emphasizes the Peréz podiatrist. You have to consider whether you have to spend many hours standing, walking, or in a hot environment, for example.

It is very important to pay attention to the template, design and material in order to provide good foot perspiration and greater well-being. A frequent mistake is to use it for every day. We should, if possible, change footwear in the middle of the work day . Thus we ventilate the shoe.

The shape of the slabs must be adapted to each need by means of the sole and its cushioning capacity, the cordon system, the materials and the height of the heel part. The sneaker that a handball player wears is not the same as a running racer, Pérez says.

You also have to wash your shoes from time to time, since there are activities that involve a lot of sweating.

From the College of Podiatrists of the Valencian Community (ICOPCV) a decalogue has been developed to properly choose footwear in dependent people. In addition to paying attention to generic recommendations, seams should also be avoided so that chafing or other dermatological problems are not generated that, if there are problems when communicating, may not be detected and lead to major problems such as ulcers. And closed and high instep footwear is recommended because they confer greater grip.