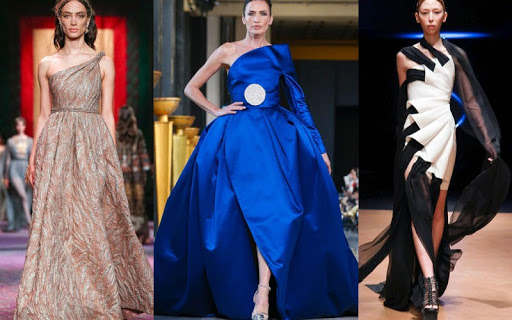 2020 is a trend in fashion and can be adopted by brides on the day of the engagement which is the dresses with one porter where it has emerged strongly during haute couture week for the spring and summer season.

Modern feminine designs by Lebanese designer George Chakra with a single porter’s shout.
We loved the narrow blue dress with a mermaid cut and the blue lily dress with a floral porter.

George Hobeika’s dresses combined luxury and femininity featuring a multi length yellow dress and one porter a pink and silver embroidered dress with a single porter and a feathered layered skirt.

She became one of the first and only British role to be selected by the Guild’s High Fashion Design Room to showcase her collection at Paris Fashion Week next to international brands such as Chanel Dior and Valentino.

Ralph and Russo also presented a light blue dress with a tight and ruffled neckline with a single shoulder decorated with ruffles.

Zuhair Murad’s blue dress was impressed with the one porter and the long front end look with the sparkling embroidery that adorned it.